Another popular hike is the one to the Trolltunga or troll’s tongue north east of Odda.
As this hike is supposed to take 8-10 hours return and we have already done 3 walks together (one of them to Kjeragbolten took 5-6 hours and I was totally shattered after that one!) I decided to let Logan go to Trolltunga by himself. This way I wouldn’t hold him up and he could go his speed.
I meanwhile washed all the clothes again we had in the washing machine in town yesterday and didn’t get clean (oh what fun). So while I’m busy boiling up water, soaking clothes, washing, scrubbing, soaking, hanging out clothes and start all over again, Logan is racing up and down the mountains between Folgefonna and Hardangervidda National Park. 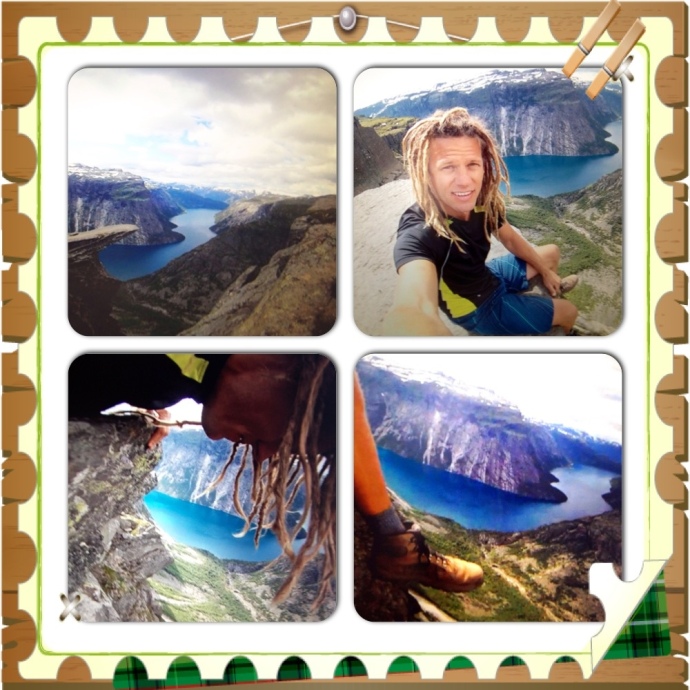 About 4 hours later I hear a voice behind me: “Ah washing clothes, are you?!” LOGAN?!?!? I was surprised but I wasn’t. I thought he might take about 6 hours, with 4 he surprised even me a bit! So here you see why I can’t keep up with him!!!
He said the Germans who left before him, came his way half an hour after he reached the Trolltunga! So they were WAY behind.
There’s a free toilet and warm shower provided at the car park which we make use of before leaving and driving on to Eidfjord.
Actually going to Eidfjord wasn’t exactly the plan. We are planning on catching the ferry from a place called Brimnes, before Eidfjord but we didn’t have any cash on us and had no idea whether the ferry accepts credit cards. Just in case we keep on driving to get cash out in the next town which happens to be an absolutely beautiful little haven called Eidfjord! A large cruise ship, the AIDA, has docked here and after getting out some cash, we decide to stay the night here – right at the Hardangerfjord, in a no mobile home zone! Well seriously, the sign is so tiny that we see it much later when we had already hung out all the clothes in the sun to dry. We didn’t move anymore and fortunately no-one seemed to bother.

In the morning we couldn’t help ourselves but drive a little further in the “wrong” direction to have a look at this popular waterfall, the Voringfoss. On the way we discover a nature centre where we think we could possibly pick up some more info on the Hardangervidda, a mountain plateau which is now a protected national park. The whole plateau is above the tree line and due to it’s year-round alpine climate, arctic animals such as the polar fox or reindeer can be found here; further south than anywhere else in Europe.
Since it is very rare to see reindeer, bears, wolves or foxes, we choose to buy tickets to the centre which include a fabulous movie shown on a wide screen (actually 5 screens). Geography, flora and fauna are shown from the perspective of a helicopter flight and while watching, we sometimes get dizzy when the helicopter turns or flies through small gorges etc. The video alone is worth the entrance fee of 120 NOK (about 16€/$20). After the video we have a look at the very informative exhibition as well.

This is what we see when we exit the exhibition, do you see this too??? 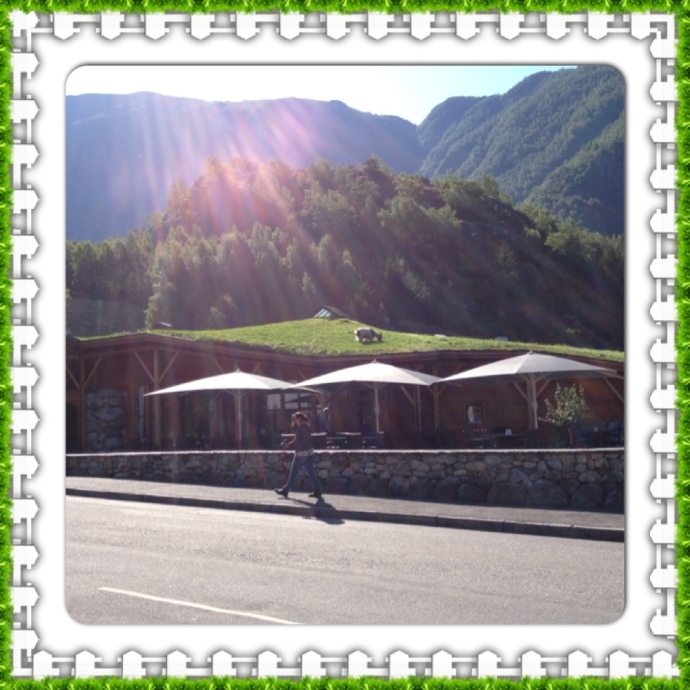 YES! It’s a goat on top of a roof! In Norway there are many houses with natural grasses growing on top of roofs. This one is being utilized as a goat’s pasture at the same time!

Then we drive on to Vøringfoss from where we have an impressive view over the country side and a 182m deep gorge in which the waterfall drops into.

There’s also a tourist shop nearby offering all these Norwegian things again, for example these postcards:

More on the Hardangerfjord and Bergen in the next post!